Jason Byrne is celebrating his twentieth year at the Fringe and he shows absolutely no signs of letting up, holding the audience in the palm of his hand throughout this standup tour-de-force and having them howling within ten minutes of walking onto the stage.

The topics he covers are nothing out of the ordinary, but his strength of character and delivery really creates a fantastic hour of comedy. Of particular note is the way in which he interacts hugely with the audience throughout the entire show, seemingly abandoning his prepared material to go off on wildly hilarious tangents with whatever the unsuspecting members of the audience hand him.

And that’s without going into the treat he has for the audience towards the end of his show, where they get to humiliate him, for a change. Brilliant.

It’s his 20th anniversary at the Fringe and Jason Byrne is hilarious. He is one of my Fringe highlights and a must see every year! While the queue to get in is is exponentially long, it’s well worth the wait. The laughter that follows is non-stop! 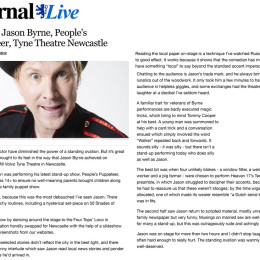 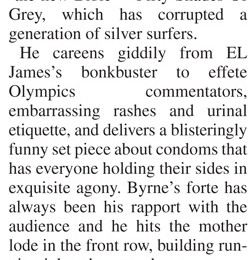 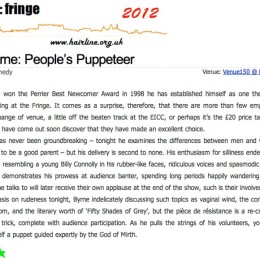 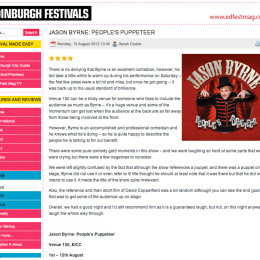 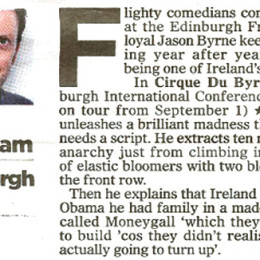 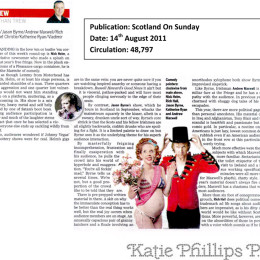 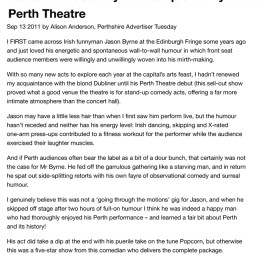 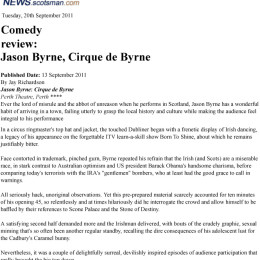 Jason Byrne is a festival favourite of mine and tonight (his opening night) he didn’t disappoint. Highly recommended from me and I give it 5 stars…
read more…

Having never seen Jason Byrne before I left with a clear view of Byrne’s Identity: a frantic paced, all action comic who delivers genuinely joyous comedy. Recommended…
read more…

Jason Byrne is so good it hurts

Going to see Jason Byrne is what is known as a safe bet. Byrne is consistently brilliant …
read more…

As wonderful, enjoyable and just plain brilliant as ever, make sure you grab a ticket….
read more…